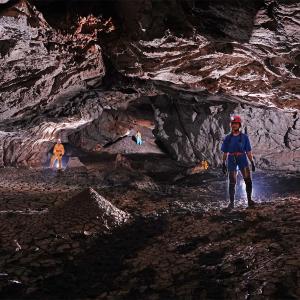 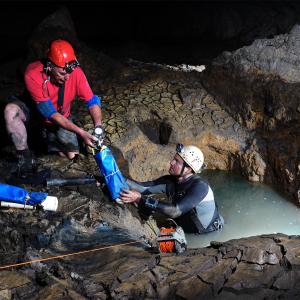 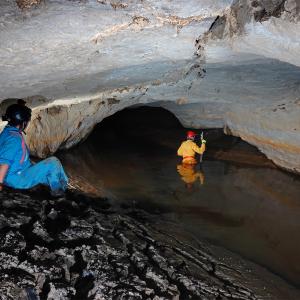 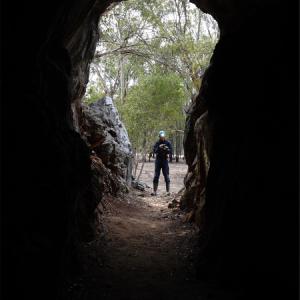 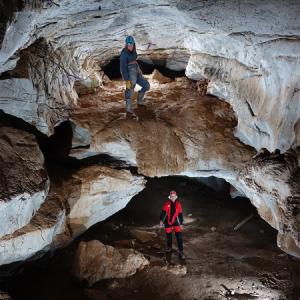 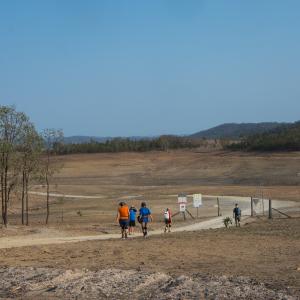 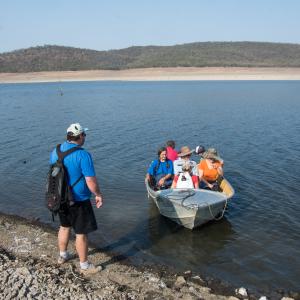 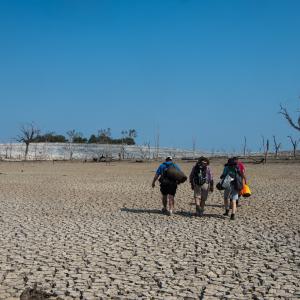 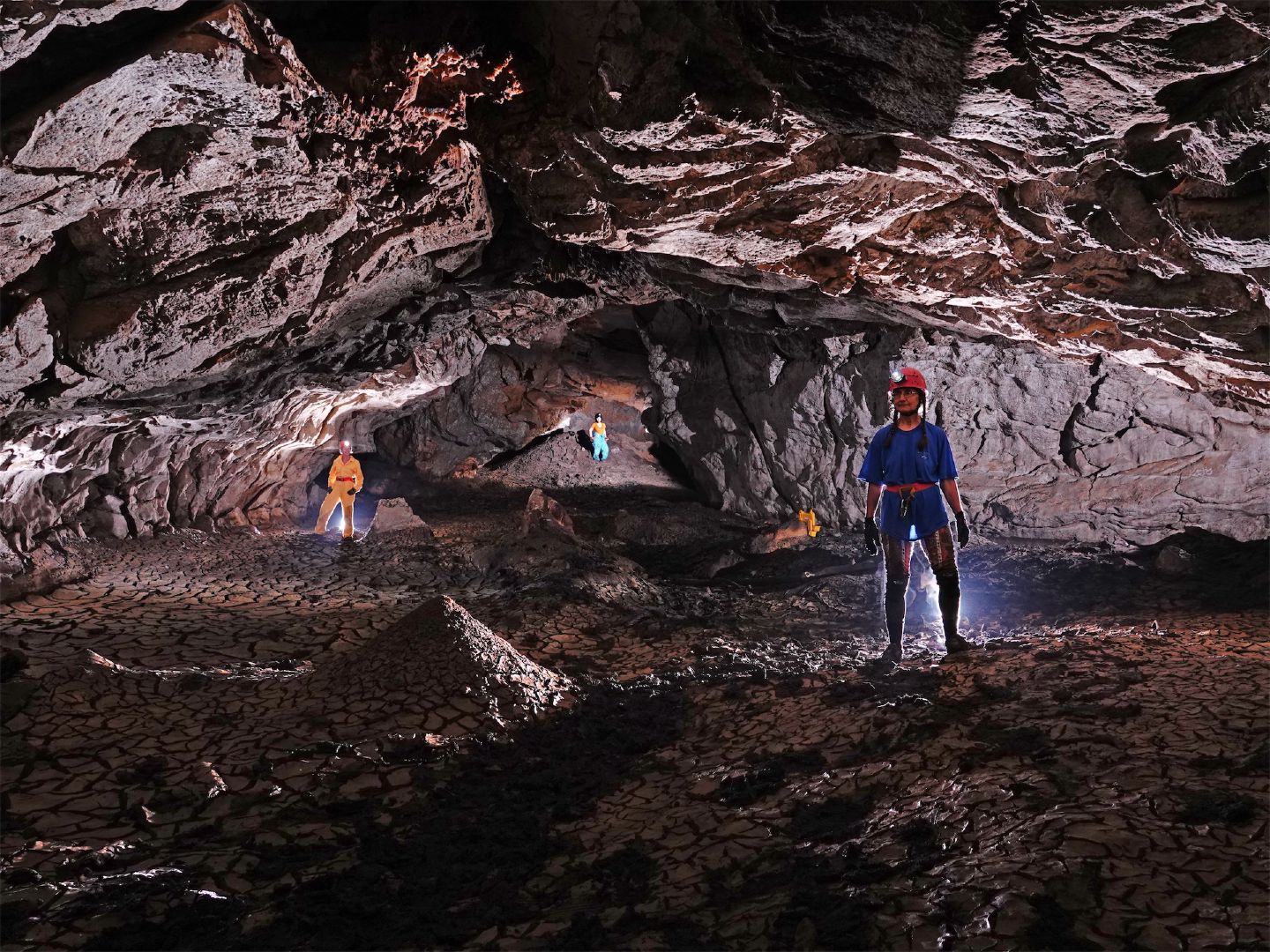 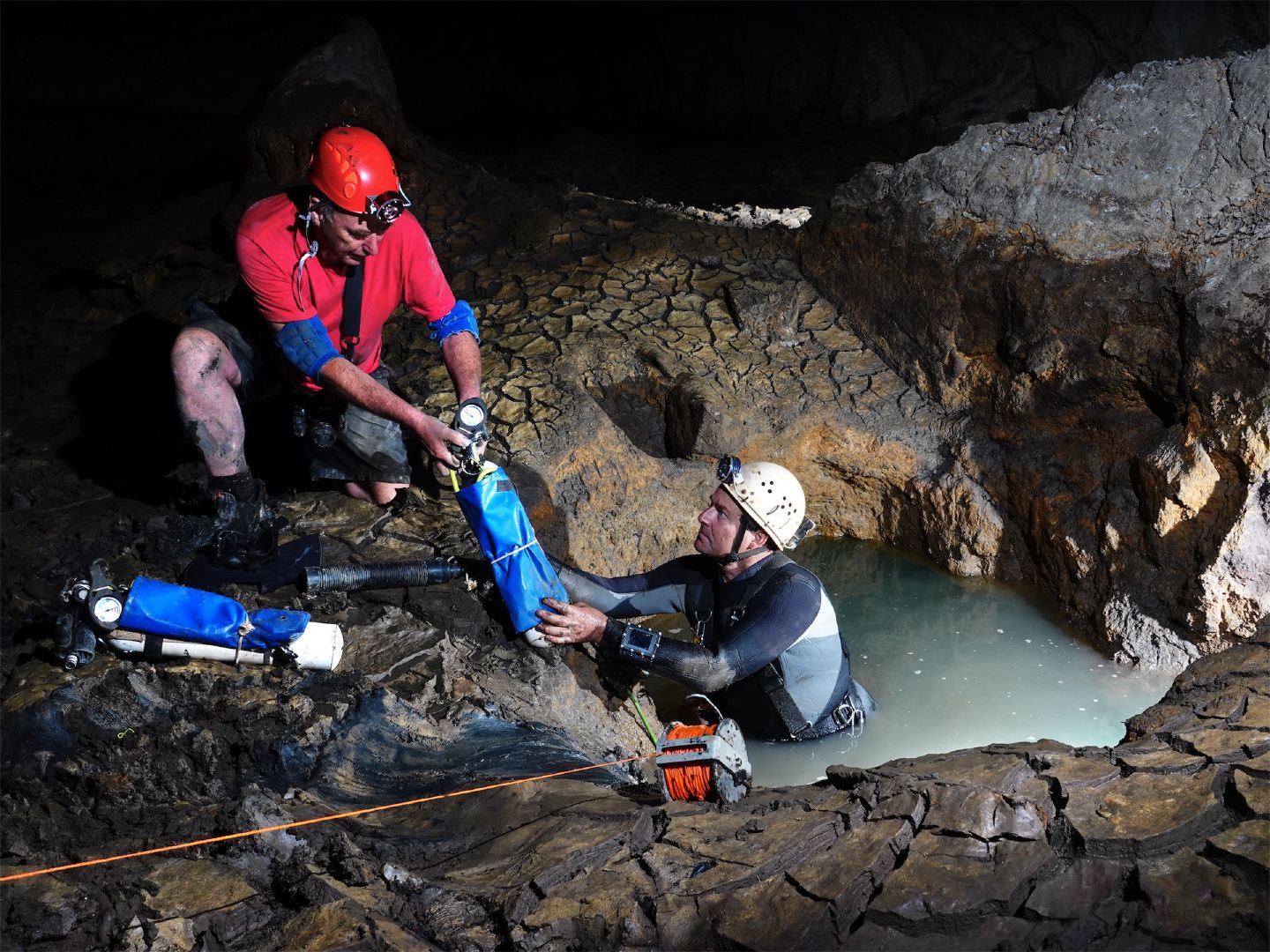 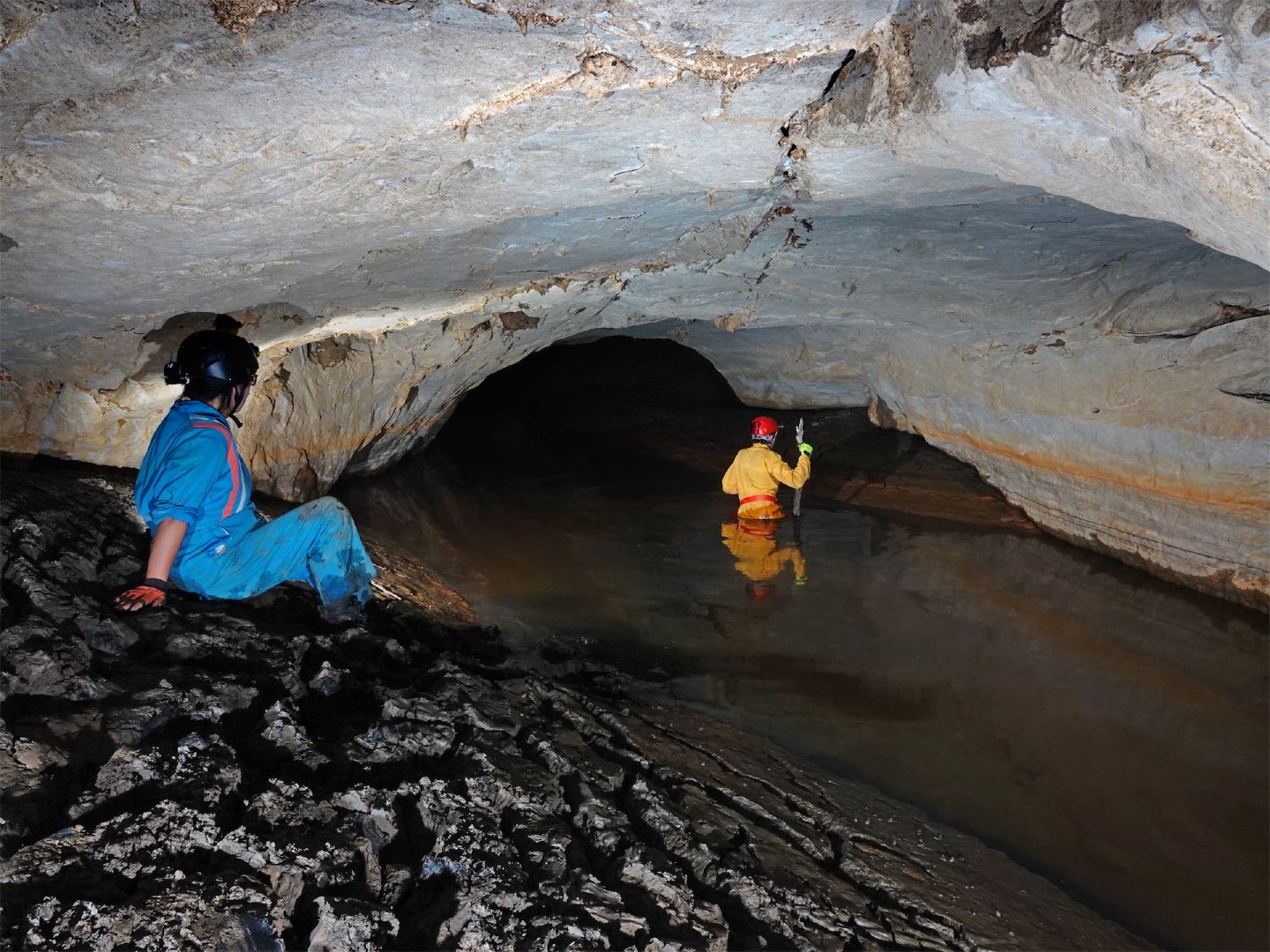 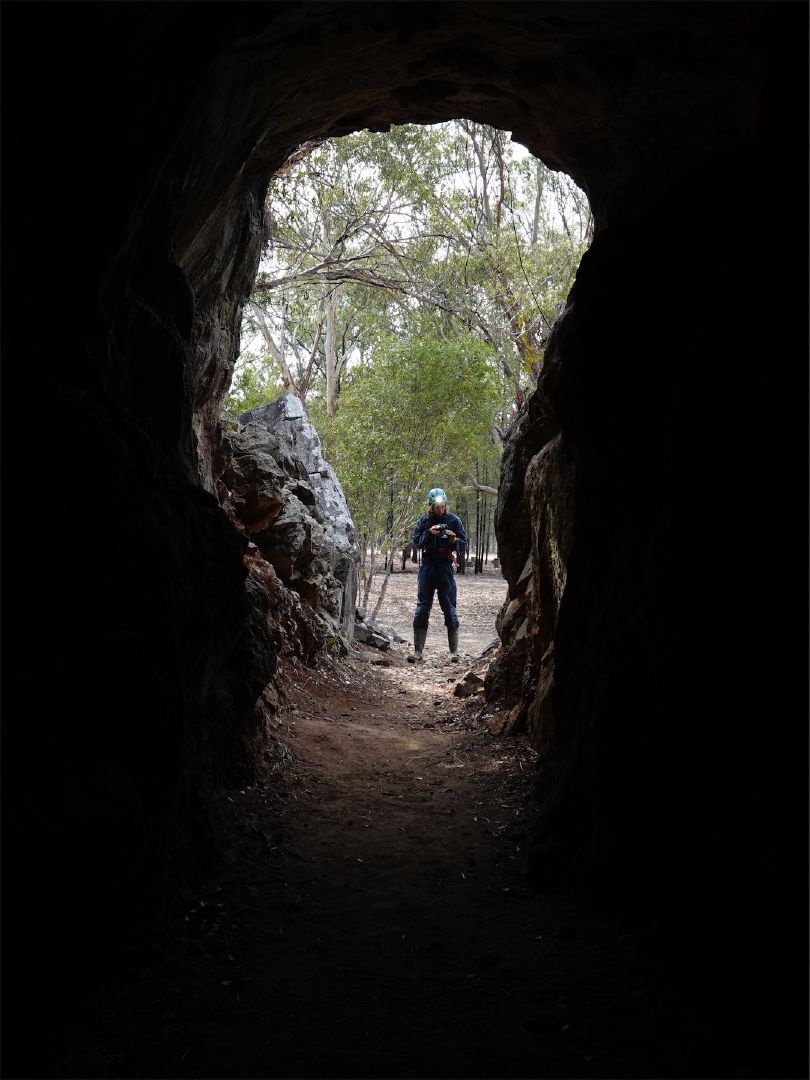 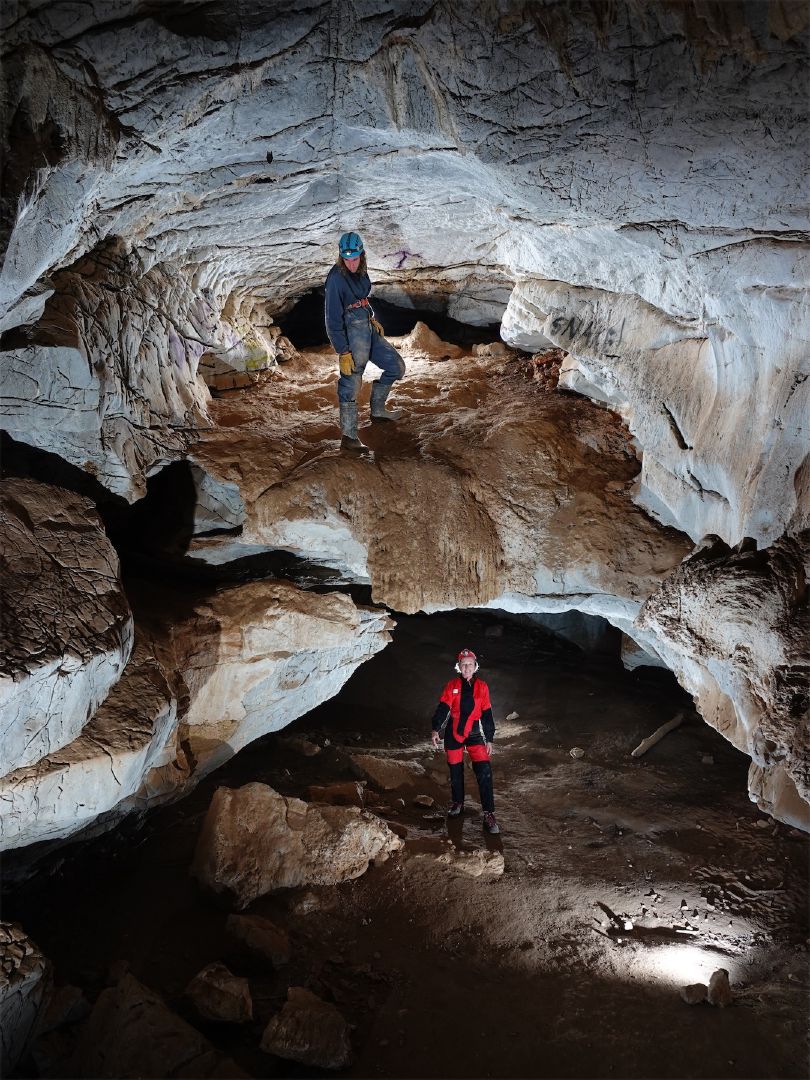 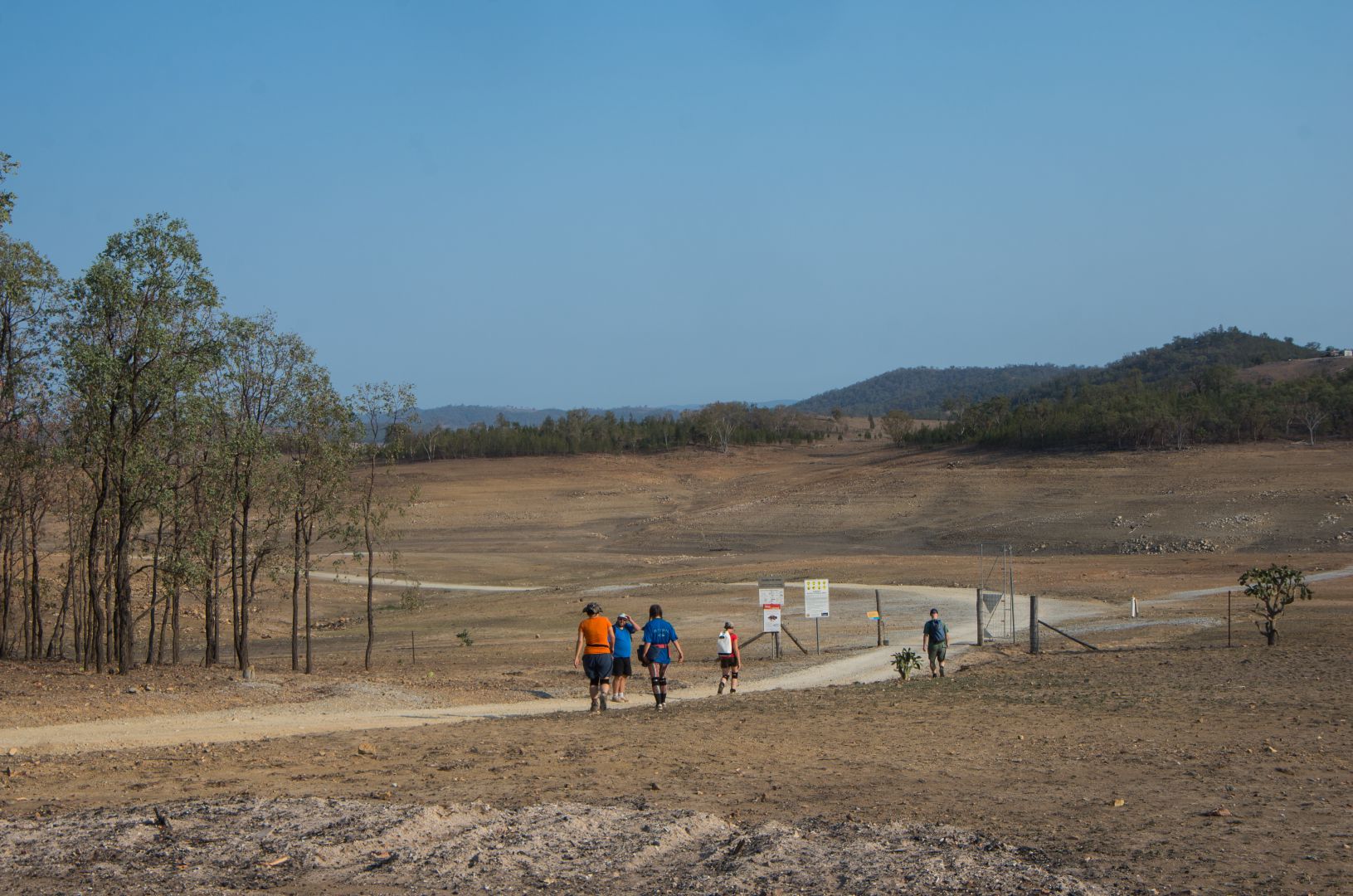 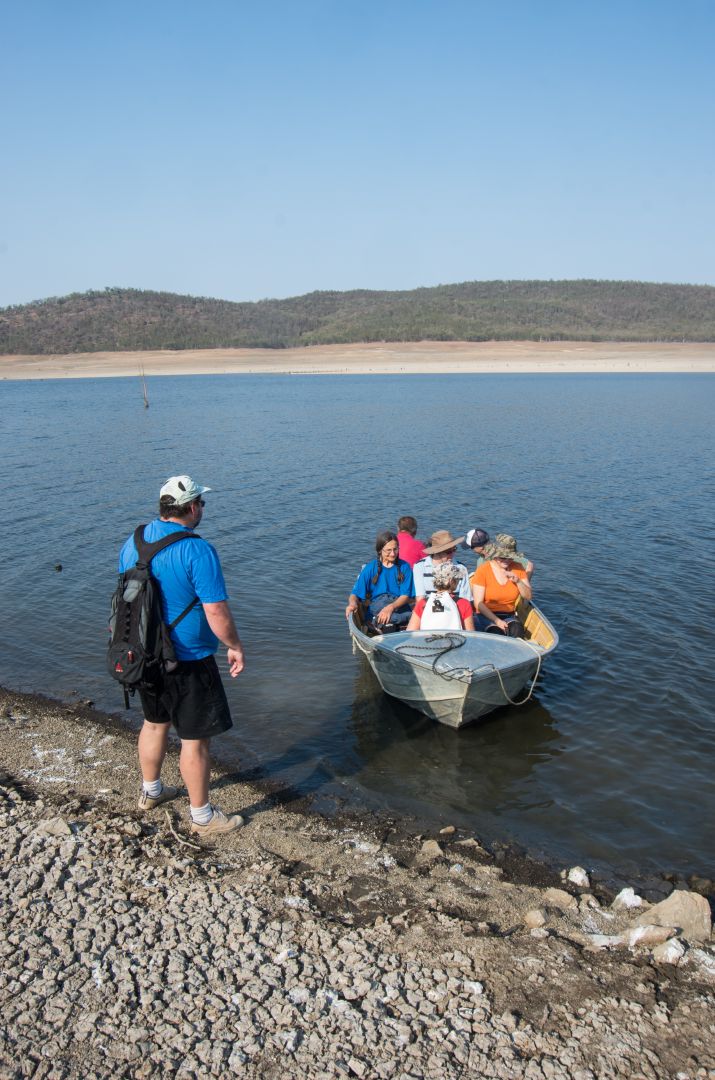 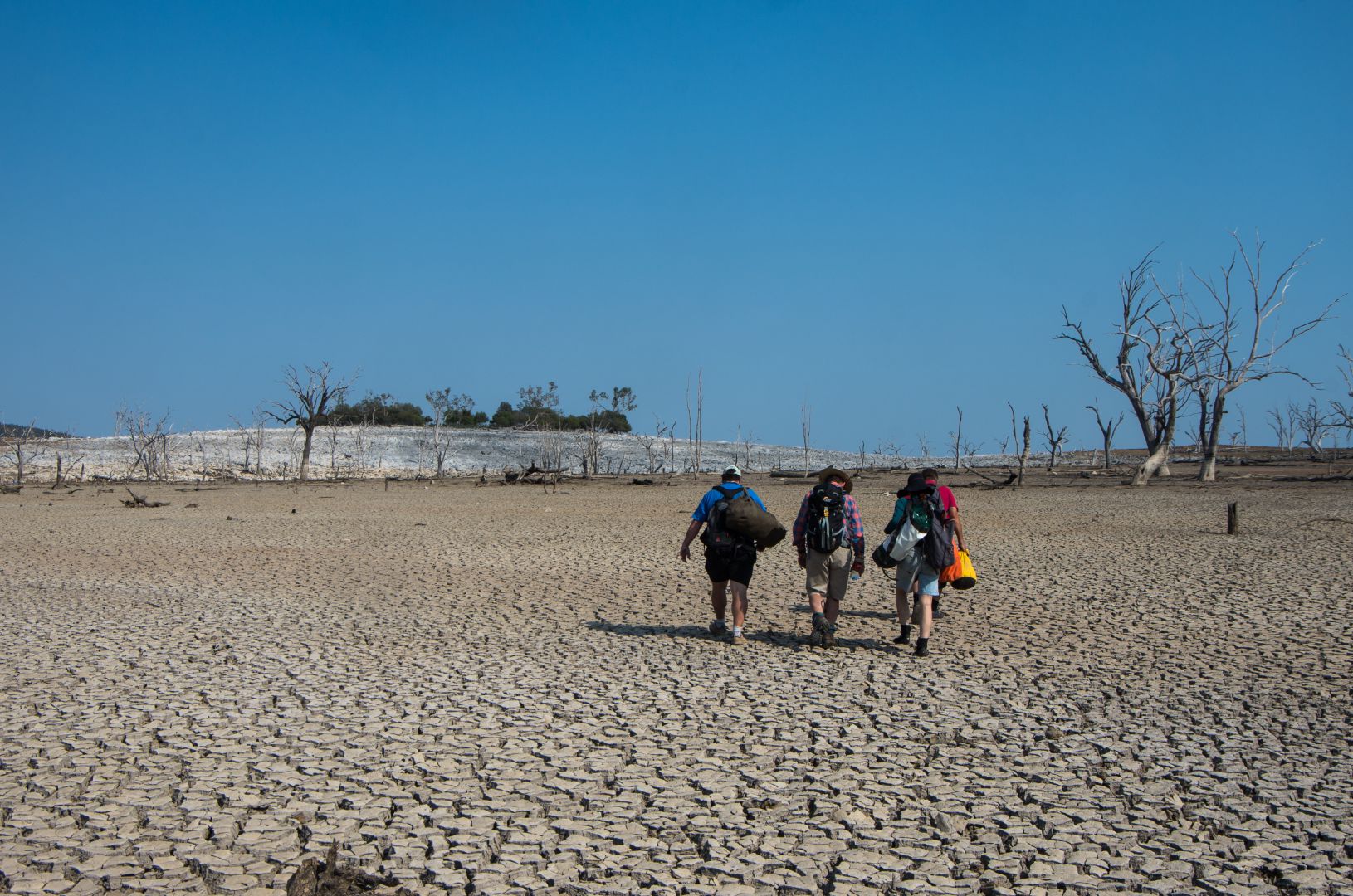 Glenlyon and Viator Caves (collectively Texas Caves) are south-eastern Queensland’s most significant cave systems. Unfortunately, they were flooded by the construction of Glenlyon Dam in the mid 1970s. This was an act of blatant environmental vandalism that the local caving club, the University of Queensland Speleological Society (UQSS, since defunct), fought in vain against. The current drought has severely affected the region, with most of the catchment of Glenlyon Dam receiving 20-40% of mean rainfall in 2019, and 50-70% of mean rainfall over the past three years. This has caused an unusually low dam level, with under 5% storage levels for the past few months, and a current estimated level of 2.5%. The low dam levels presented a rare opportunity to visit the caves. Cathi Humphrey-Hood took this opportunity, organising a joint caving clubs trip, with members from MSS, NHVSS, SUSS, and myself from NUCC all trooping up to Texas Caves. So a big thank you to Cathi for putting in all the hard work to make the trip happen!

But anyway, how did I end up on the trip? Well, Chris Bradley and I helped with part of the packing up of the ASF library from Canberra in August. In the process, I pilfered borrowed a bunch of bits and pieces on areas I was interested in, including a stack of UQSS journals, as I was going up to Queensland in November to get my car some pretty maroon plates. I’d discovered that Glenlyon dam was very low, and thought it might make an interesting stop. Cathi spotted me stealing borrowing the journals, revealed she had something similar planned, and invited me along. Thanks Cathi, you might even get the library material back this decade!

So duly we all congregated at the caravan park at Glenlyon Dam. Some had easier trips than others- Phil Maynard coasted down from Toowoomba, while most of the other Sydneysiders and Novocastrians had to slog their way up the New England Highway. I should have had an easy trip, as I was already in south-eastern Queensland, but got geographically embarrassed by my assorted GPSes. Typically, I had 4 GPS units, several different paper maps (and a compass), and still found myself at the end of a dirt track, in a farmers field, past several creek-crossings, looking at a double-padlocked gate obstructing the way on at 10pm. Obviously, I was late, and missed the Friday arvo pleasure-cruise up the dam to do a reccie.

Saturday morning was to be Viator Hill day, and started early with a tropical start, even though the Tropics are still 600km away. Who cares, with the drought and heatwave passing through, it was hot enough already. Gear was packed, and trucked down to the boatramp for a first shuttle run up the dam. Everyone else had to walk, especially the stragglers who showed up on Saturday morning just as we were about to leave. Thankfully, we only had to walk part way on the true-left bank of the dam, as the boat came back to meet us, and soon we were all up to Viator Hill. It was punishingly hot by this point, so most of us dived into the first cave we found, which happened to be Main Viator Cave (VR1). Only after GPSing it though- about ½ dozen GPS units had made the journey up the lake, and all were being put to good (redundant?) use.

Main Viator was a mudfest. Imagine the muddiest cave you can think of, and then make it worse. Well, so long as that muddiest cave isn’t at Jenolan, anyway. Main Viator is probably the lowest cave on Viator Hill, and is the former efflux of the system. It is large and predominately walk through, except for the bits where you have sunk up to the calves in mud and have to crawl. At a guess, I’d think the lowest parts of the floor were covered in an extra meter of mud caused by sediment from the dam. The lower entrance to Main Viator is almost always flooded and has numerous daylight holes, so I’d presume there is a constant and gradual sedimentation process as water slowly cycles through the cave from the dam.

After Main Viator, we all split up and wandered over the hill to do our own things. Some surveyed, others trogged around trying to locate the known caves, some photographed, others lurked in the cave looking for any excuse not to go outside in the sun, and some valiantly sat in the shade of the few meagre trees on top of the hill and fought off the meat ants. If you weren’t on the trip, and can guess who-did-what correctly, I’ll buy you a bottle of (very cheap) wine (look, I’m a uni student, what do you expect, Penfolds Grange?). Hint: there were 4 surface troggers, 2 surveyors, 3 photofaffers, 2 cave sitters, and 2 shade sitters.

A range of caves and probable looking holes were found, some even with tags intact. Glenlyon and Viator both use a different style of tags to the ones we’re all used to, with a long narrow strip of aluminium stamped with the cave name (but not number) held in place with a bolt (frequently steel) at each end. Most of them were badly corroded from immersion in the dam water, with the aluminium going soft and powdery, and the bolts being rusted. A large portion of them were missing, especially on the lower caves. These need urgent replacing before the dam rises, as for several caves, the only way we could positively locate them was due to the remains of the tags.

The dam water is evidently extremely aggressive, as much of the karren on the surface had dissolved or softened, and any surviving formation in the caves had a powdery, chalky consistency. Also, several tinnies were spotted that looked like they pretty much had the hull corroded off them! This is what causes the urgency for with the tags, as not only is it destroying the existing tags, but also evidence of where the tags were.

Eventually everyone congregated back around the second major cave on Viator Hill, Russenden Cave (VR2). This was clearly marked for visitation by dam users, with many driftwood sticks jammed into cracks around the cave, surmounted by beer cans and bottles. Great pleasure was had in tearing these down, although it is suspected that they will return in short order. Russenden Cave is higher up on Viator Hill, and had less of the thick, gloopy mud in it. However, the back reaches of the cave do seem to have had a moderate amount of in-fill by lake mud. The going theory for this was that as the entrance is one of the higher points of the cave, it fills rather dramatically, forcing the first sediment-filled water out to the end of the cave. Sadly, this once beautiful cave is being badly damaged by visitors now that the water levels are lower, with many signatures scrawled on the walls dated to 2019. Much more phototime was had nonetheless.

Following Russenden and lunch, much of the group returned to Viator Main to watch (or photograph) Rod OBrien diving into the lower level of the cave, which was still completely flooded. A splinter group of Rod Smith, Phil, Anna and me went wandering around to look at the other caves. Bevans Pot (VR4) was found and investigated, and Crystal Cave (VR3) was found to be completely choked with sediment. Phil and Anna tried a short dig there, but it revealed only more mud and was aborted. After this, the sun was starting to get to the group, so rather than go look for some of the other caves, we went and hid in the most shady hole we could find while waiting for diving (and photos..) to happen.

Eventually the migration back to the boat for a lift back to shade, aircon, beer, cheese and crackers began, only to be slowed by a small problem- the boat wouldn’t start. An hour later, our poor struggling ride sputtered into life, and we all eventually go a lift back. Except for Keir, who got tired of the whole affair and walked back around the dam on his own. Cold drinks and a shower were definitely appreciated after a long (but successful) day in the sun.

Sunday dawned just as hot as Saturday, and was the Glenlyon day. We all loaded up the boat, and part of the group started walking. Glenlyon is just across the river to the north-west from Viator Hill, but this adds significant extra boat time. It was found to be quicker and easier to just ferry groups across the water on bends, walking most the way, rather than do long trips up and back. Because of the extra distance, we didn’t all get out there until late in the morning.

Glenlyon was a major shock: out of all the caves visited, Glenlyon River Cave (GL1) was the lowest, and was only just above the water level. It is possible we were the first group to enter the cave since it was flooded- the dam has been down to 5% before, but never as low as 2%. The cave was known as a major, walk through river passage, with 30 entrances. Instead, we found a series of heavily silted dolines, and crawling passages that were nearly full of thick, waterlogged black mud. Any streamway in the cave more closely resembled puddles trapped behind banks of mud, perched potentially on meters of mud. It was horrible. This is what a dying cave looks like, and is the future that awaits all the caves on Viator Hill and at Glenlyon. It is only a matter of time, rather than destiny.

Disheartened by the caves, heat, and long trip back, we retreated to the cabins to drown our sorrows in an early and extended happy hour. The boat performed admirably this time, with no motor troubles at all. Morale was regained with the discovery the Kiosk sells cheap and tasty icecream (the macadamia comes highly recommended). Showers were had, the museum visited, and the first people departed south.

Most of the group stayed the night, and departed on Monday, with a splinter party also visiting Ashford Caves on the way home. Ashford Cave (AS1) was rather interesting, but bears the scars of receiving too many visitors- broken formation, scrawled signatures, the usual. Garry enjoyed taking photos for his book. There is actually a significant amount of limestone at Ashford, but much of it is on private land, and the area would be well worth another, more prolonged visit if access permission to trog this could be arranged.

After Ashford, we all went our separate ways, and I headed back to Canberra via Gunnedah, scoring a 6th flat tyre in 2 years about 10km east of town (five out of the six have been on caving trips). It was a total writeoff (catastrophic sidewall puncture), and likely has done nothing to improve my driving reputation.

The trip was an excellent opportunity to visit some caves that are rarely visited by organised speleos now. We got a lot done, and made some excellent progress towards updating the documentation of Glenlyon and Viator Hill caves to a modern standard. There is however, much more that needs be done there, and barring a wet summer, I think it very likely someone will be making a return trip in 2020.

A shortlist of tasks that need be undertaken at Glenlyon Caves and Viator Hill would be:

• GPS references for the caves need to be verified, as several caves are yet to be relocated

• Accurate cave entrance height data needs to be gathered, as well as for features around the dam wall

• Several extra features need to be tagged, and possibly dug

• Several smaller caves seemingly don’t have maps, and making a record of them could be useful

• New maps of Russenden Cave and Glenlyon River Cave would be very valuable, to document the effect of the dam on the cave passages