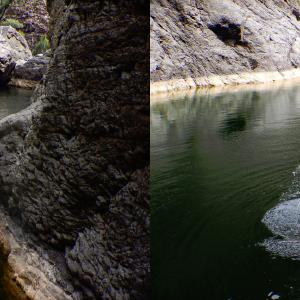 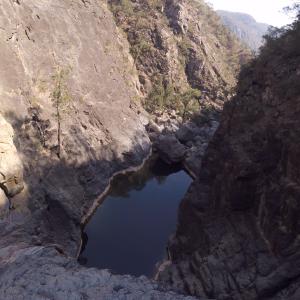 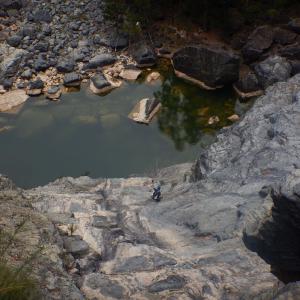 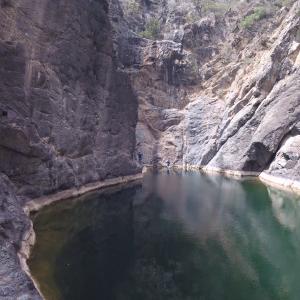 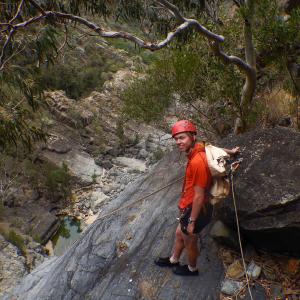 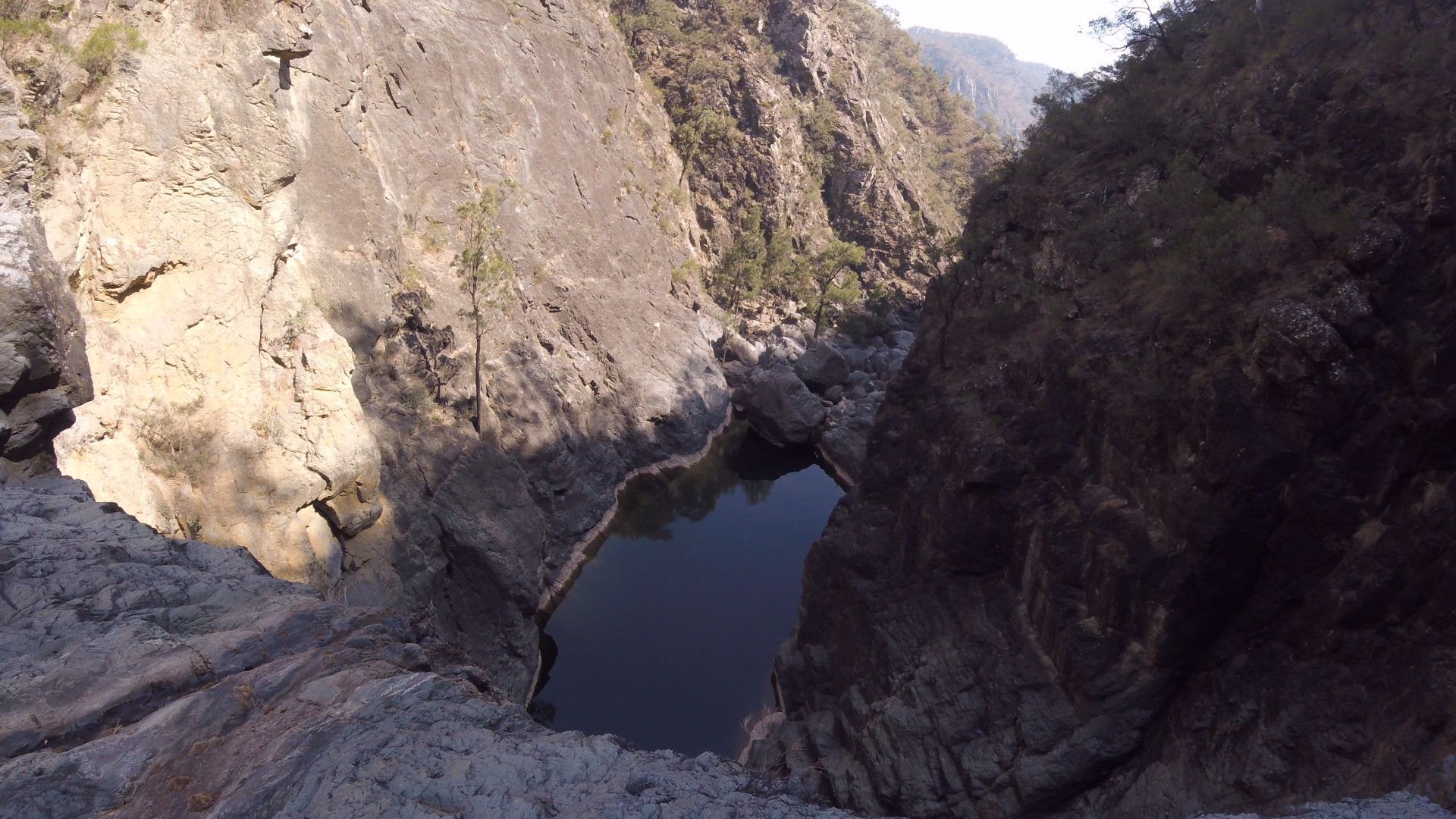 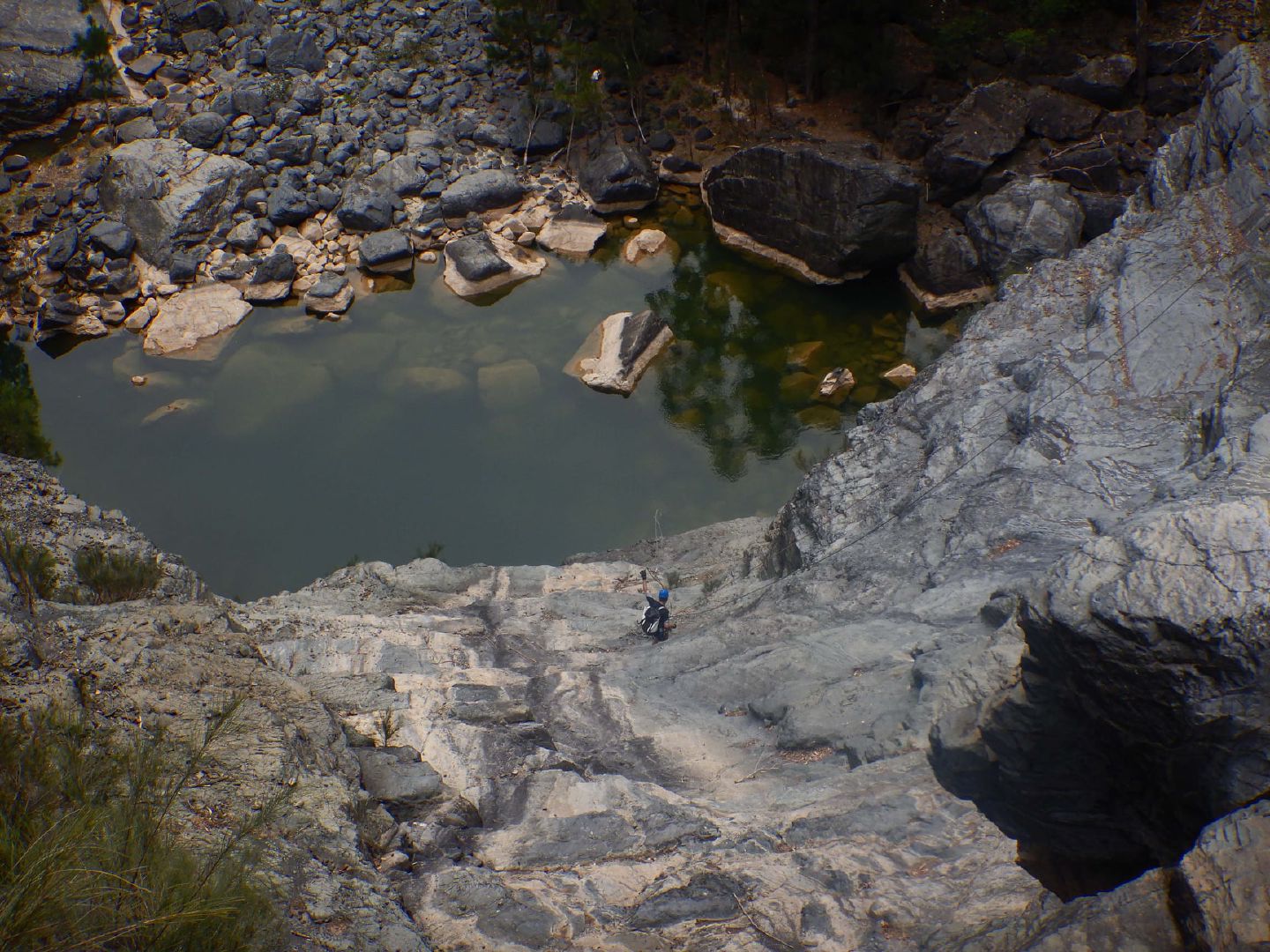 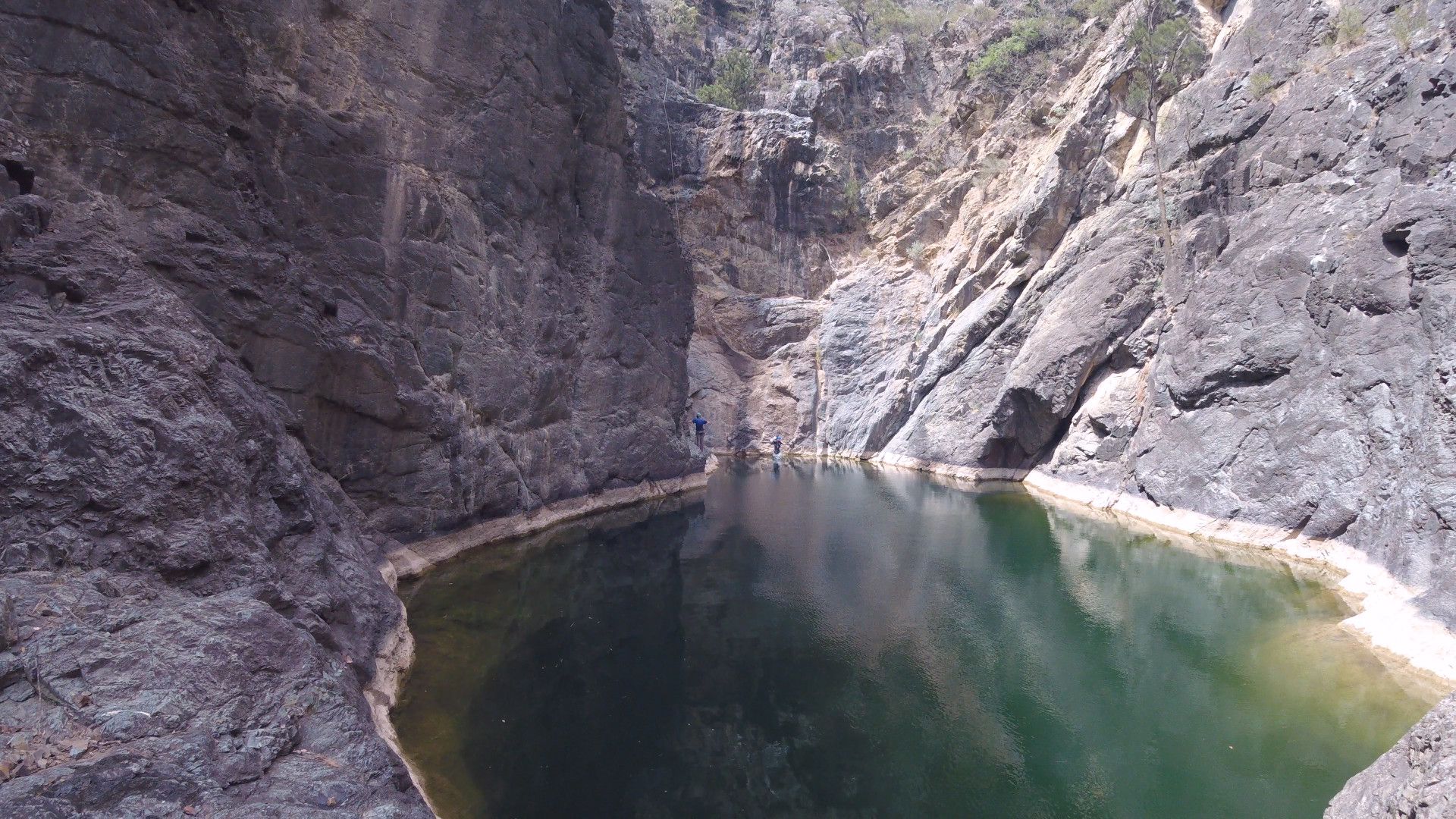 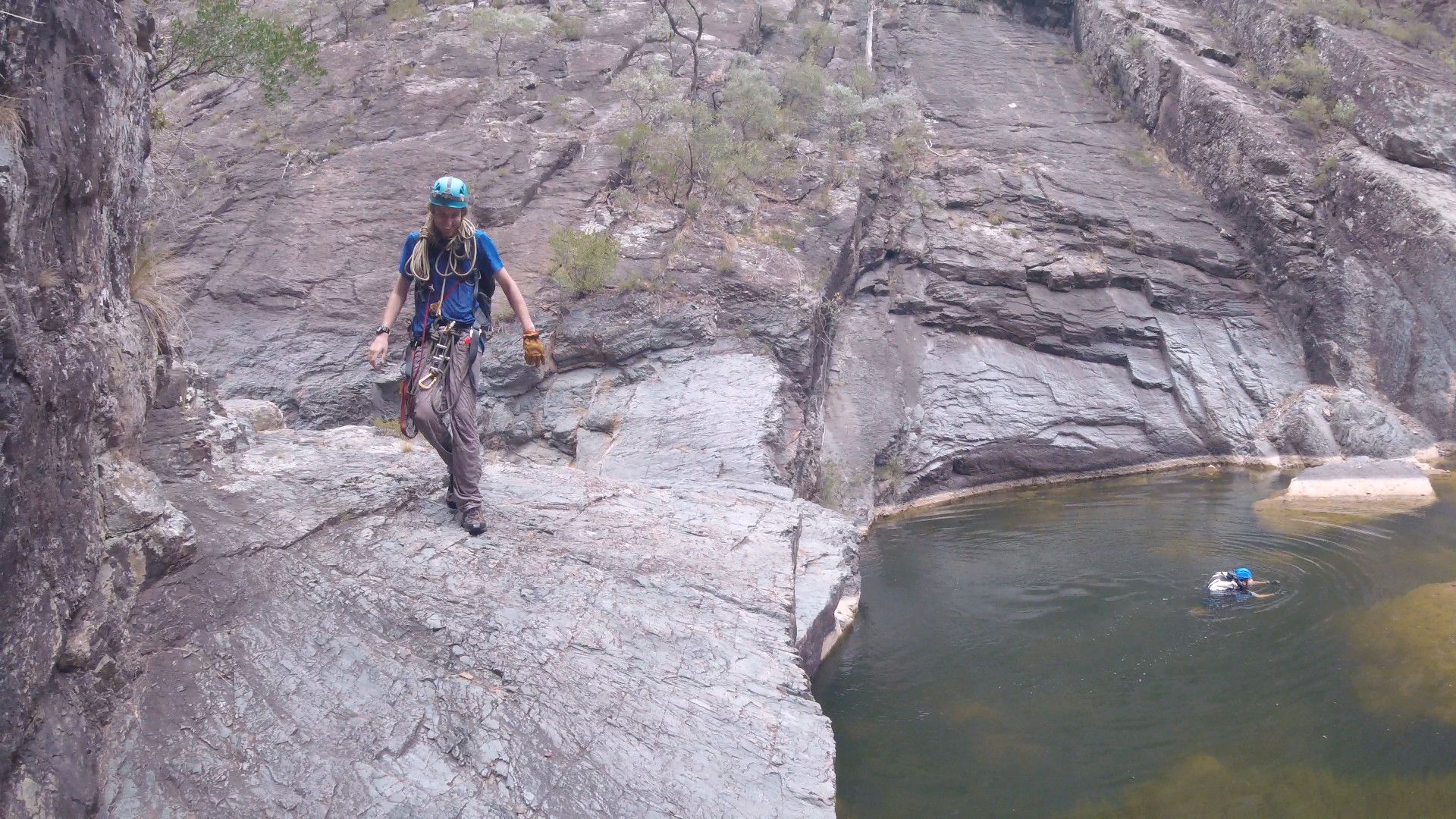 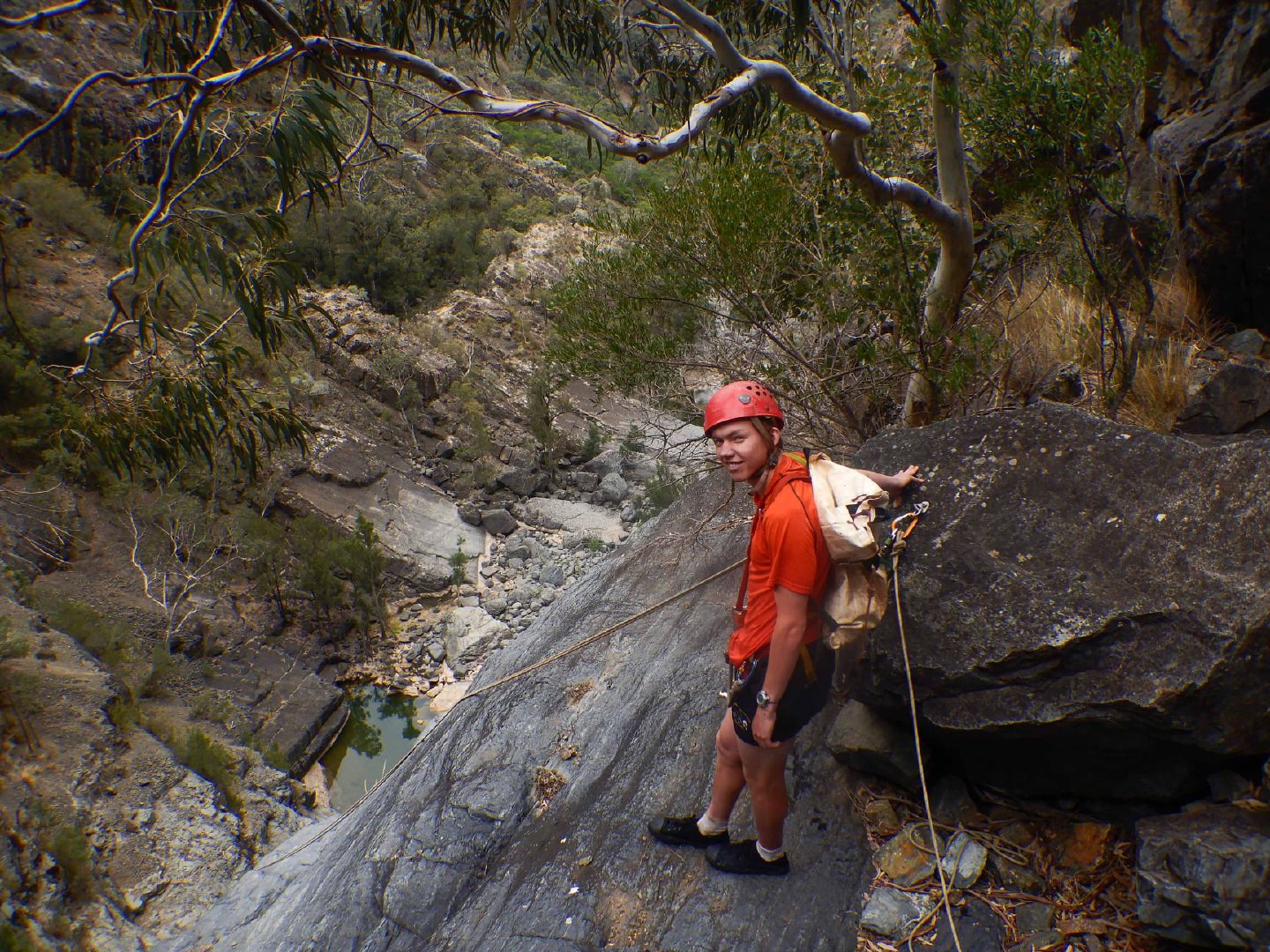 There was a thick haze of smoke as we departed ANU at 7AM which seemed to worsen as we approached Bungonia. Fortunately as we descended into the canyon the smoke seemed to clear (or we just got used to it). The area was extremely dry and there seemed to be no flowing water at all. I suspected we might not even get wet, but I was very wrong.

The trip started off like a bushwalk without much climbing and we were moving at a quick pace. The canyon eventually started to narrow and we found some pools of water which required some thought to pass. Chris and Michael had a swim in one of the larger pools we found. Lachie and I tried to stay dry (for the challenge) and managed to avoid the water by crawling along a small ledge. Luckily for us the only thing that fell in was a drink bottle (easily retrieved) and we continued on.

Eventually we got to the first abseil (~30m?) which had a spectacular view from the top. At the bottom was a large body of water which ended up being impossible to pass without going for a swim! We had a few more pitches as we progressed through the canyon and stopped for lunch.

A pitch was scramble-able so I made my way down while the others set up the rigging. The last few metres were very sketchy. I swam to the other side and spotted a goat family (with two babies). We saw them a few more times as we made our way through the canyon but could never get close.

The last pitch was a lot longer than we expected as the water level had dropped so significantly. We dropped halfway down the pitch and then pulled the rope and continued on from another anchoring point. Traversing the canyon from here was quite tough as the boulders were all quite enormous. After already feeling quite exhausted we reached the “trail” to take us out of the canyon. It was more like a rock fall/slippery dip and we found ourselves stopping a few times just to recover (it was steep!) and avoid overheating.

Overall it was a great trip and we all thought the gorge was… gorgeous.