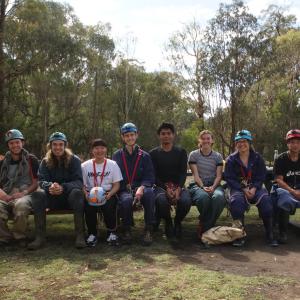 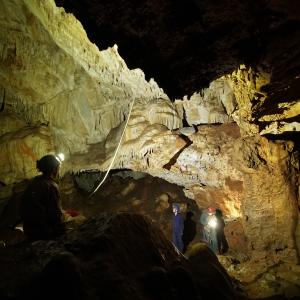 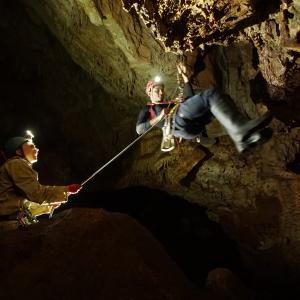 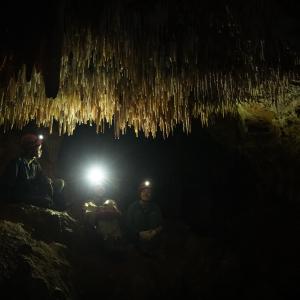 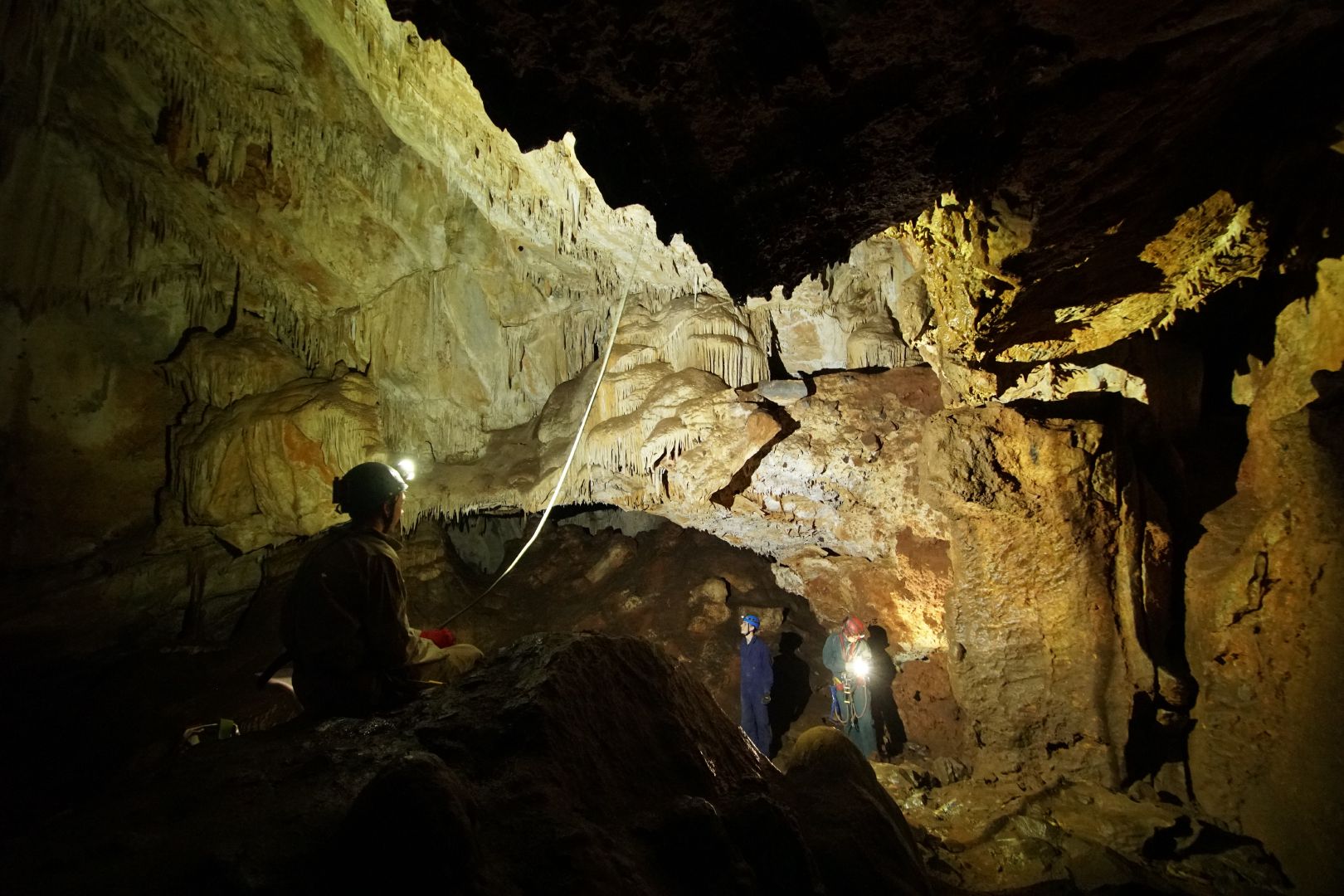 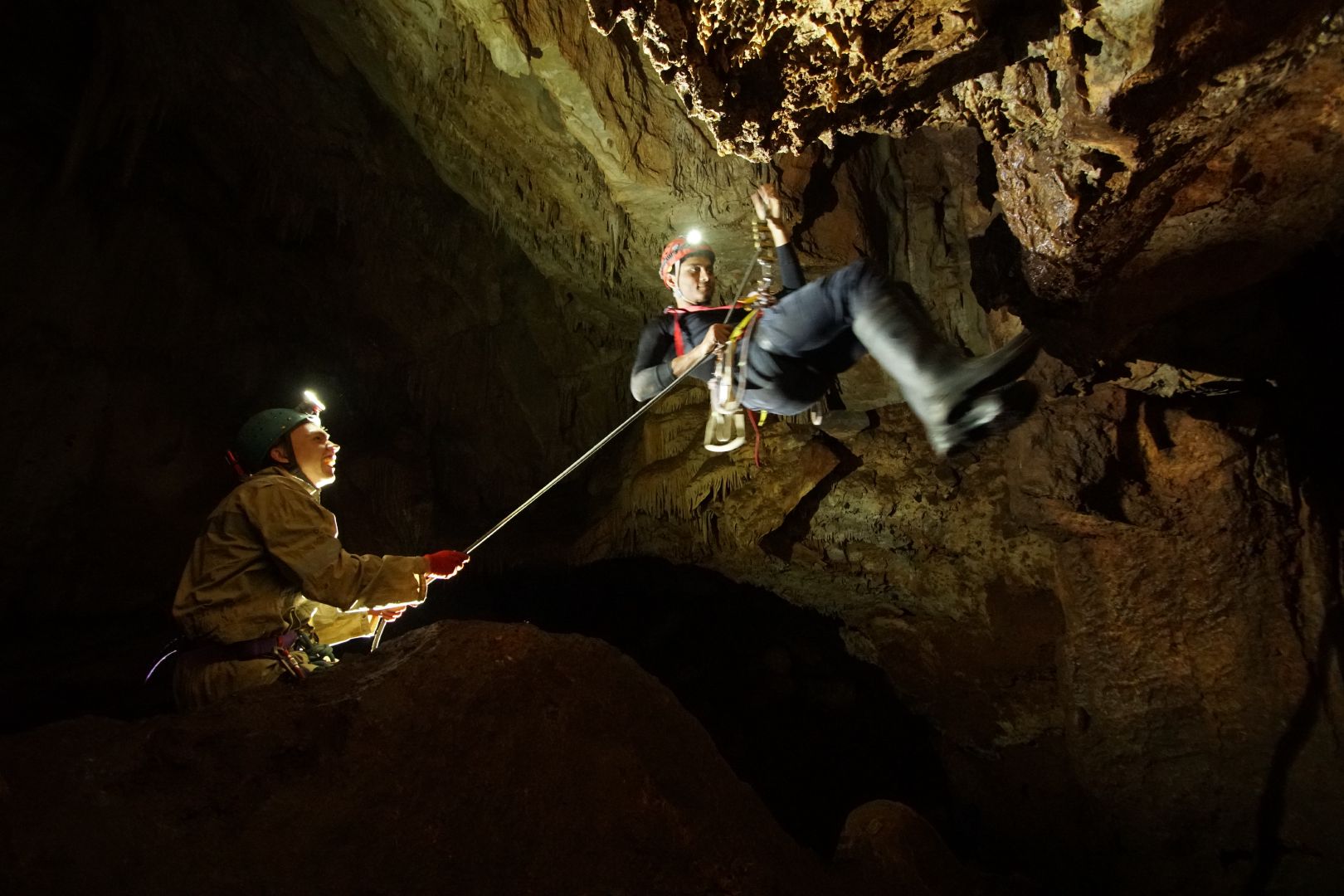 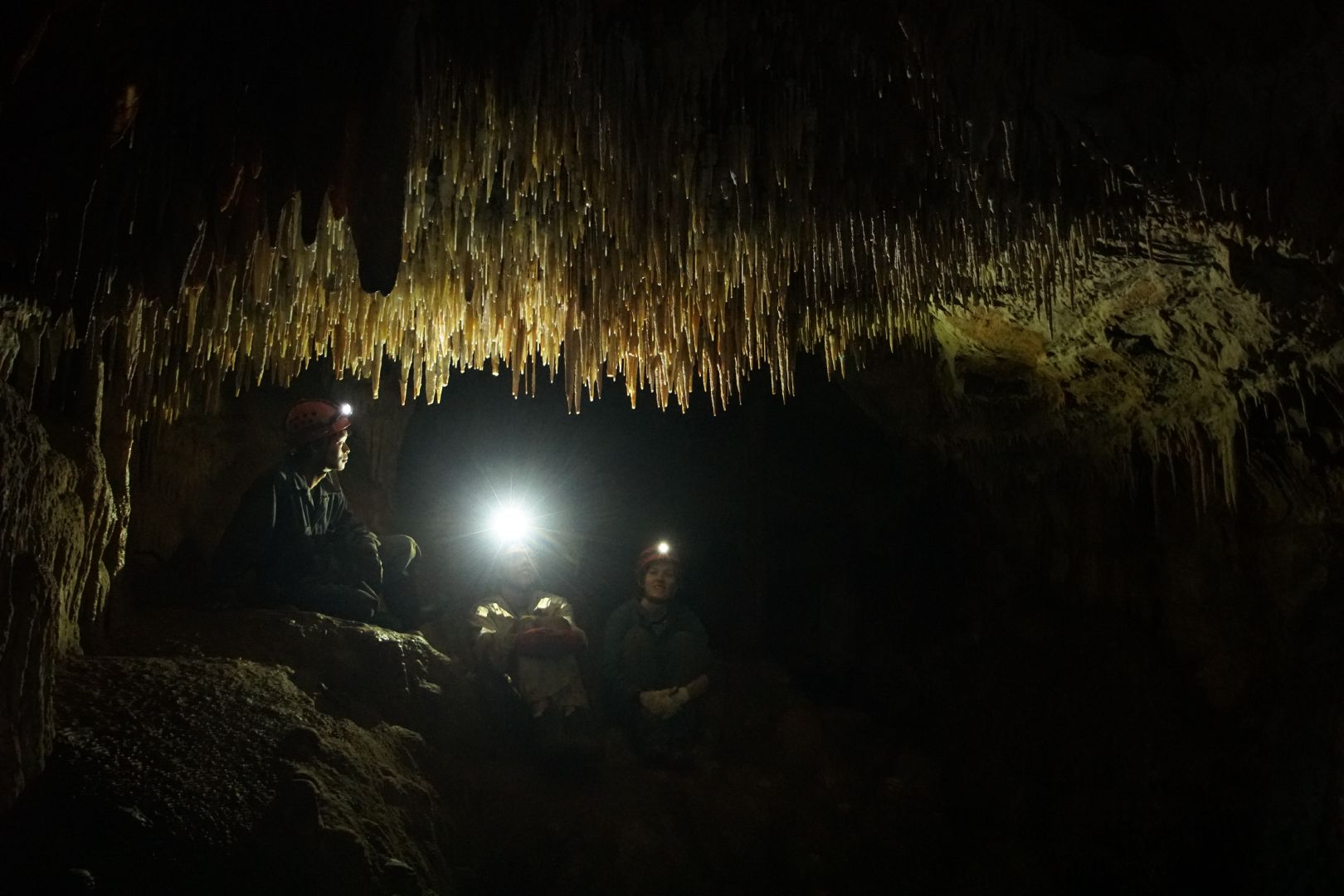 The road to Wee Jasper passes through beautiful rugged country – I was impressed. Maybe it’s because I was used to driving to and from caving areas late at night with SUSS when the surrounding countryside is invisible. Nonetheless, the landscape here sits over fingers of limestone cut through by shale, pyroclastics and other things, and it does make for a scenic drive.

We set up camp when we got there and some more time was taken carrying rigging gear to the entrance of Punchbowl Cave only to realise a large school group were already getting ready to go into it. This may have been the same group whose tents we saw across the campground from ours, all identical and all neatly pitched in a row on a 45 degree slope. We hastily transferred gear to Dip Cave instead, and abseiled in.

It was the first time caving for some of the team, and dropping down into the first chamber on a rope was an impressive way to start. We pottered around some passages and did some jollying, turning away from one section because of bats. Dip Cave consists of a series of parallel sections, named ‘Series’, and we worked our way across them.

When we made our way out, it was already evening. Everyone was tired and hungry; several pitches had made it a somewhat taxing day of caving, especially for those new to the sport (or those out of practice by about two years – i.e. myself). I ventured about the scaling poles we had still sitting in the back of our car, which had rattled with us all the way from Canberra and on which I had impaled my elbow several times getting in and out of the passenger seat. The plan had been to use them to reach a small but tantalising hole in Dip Cave, several metres above ground, over a sort of overhanging climb. The suggestion that we have a go at that now was mostly met with a reaction ranging somewhere from “that sounds interesting, but probably not for me,” to outright disgust.

As majority of the team headed back to camp, showers, dinner and a campfire, Gyver, Lachlan and myself carried the poles to the cave entrance and began what was probably the world’s worst attempt at scaling pole use in the history of caving. Neither Gyver nor myself had the faintest idea of how they were supposed to work. Lachlan had initially seemed to vaguely indicate that he had experience with them. It later turned out that his experience related more to disassembling scaling poles than to really setting them up or using them, and in fact this was probably the first time these particular poles were being used in several decades.

The enterprise began well. We devised a functional (and only slightly unsafe) method of lowering them down the entrance pitch into the cave, carabinered together and guided by one person standing on the chockstone halfway down. Ferrying them from the bottom of the pitch through a slot and into the chamber where they were needed also proceeded smoothly.

The trouble was that we assembled our poles on the ground, horizontally, but had no chance of levering the resulting monstrosity up several metres to reach the target hole. We had four poles bolted together; each an aluminium tube something like 10 cm round and 2 metres long. Together they were very heavy, very unwieldly, and very, very difficult to manoeuvre into place without obliterating formations from the roof or dropping it on our feet or heads – though we persevered, grunting with effort, for some time. In retrospect it is perhaps fortunate that we were unable to get the poles up to the hole because the whole structure may well have failed drastically when someone began to climb it. We lacked a spanner to tighten the bolts so Lachlan had used the pliers of his Leatherman to do it instead. I’m not sure how well the bolts would have held. Exhausted, and confused by the whole process, we dragged the poles back out of the pitch, de-rigged, and dragged ourselves back to camp. I couldn’t decide whether I wanted to join a SUSS trip involving scaling poles to learn how to use them properly, or whether to avoid such trips and never have to lay eyes on the darn things again.

Day 2 began with a sleep-in. We then explored Punchbowl Cave – another fun cave for jollying. There was an informal climbing competition, followed by an informal squeezing competition (the latter somewhat strangely undertaken directly after lunch). There was an interesting grotto that was subsequently identified to be low in interest and high in bat poop. There was a sneaky climb to a little plateau looking over a large, formation-filled chamber criss-crossed by fluttering bats. There was a dubious flattener to a very dubious helictite. And there was the ‘Laundry Chute’, which some party members were enthralled by and others napped outside the entrance of.

Just before we left for the carpark, I convinced Lachlan and Corey to come with me through Dogleg Cave. The cave is a short, rocky streamway that twists and crawls through several S-bends before terminating in a sand trap. The sand trap is much like a sump, but filled with sand instead of water. Somewhere beneath the sand is a gate, and somewhere beneath the gate are very beautiful passages. Unfortunately, neither of those are likely to be seen anytime soon. Nonetheless, the sand trap itself was actually quite impressive and not something I’d really expected here, reminiscent of a sea cave or a little quiet oasis in a rocky desert. Noting that there were only one or two pairs of kneedpads between three cavers and the entrance was 15 minutes of crawling back over gravel, the sand was an oasis in more ways than one.

Back at camp, everyone was ‘caved out’ – it had been a great weekend. No stamina remained for the little creek/canyon that was meant to be in the area. Earmarking that for next time, our convoy of cars filed back towards Canberra – the scaling poles rattling gleefully in one of them all the way home.