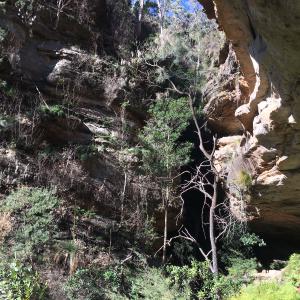 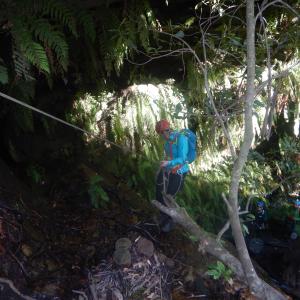 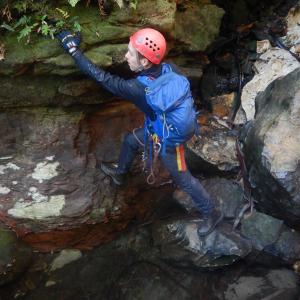 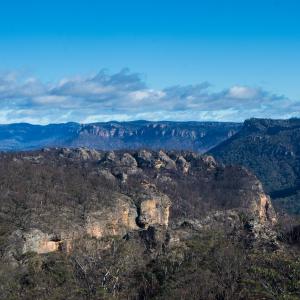 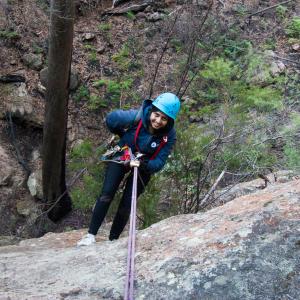 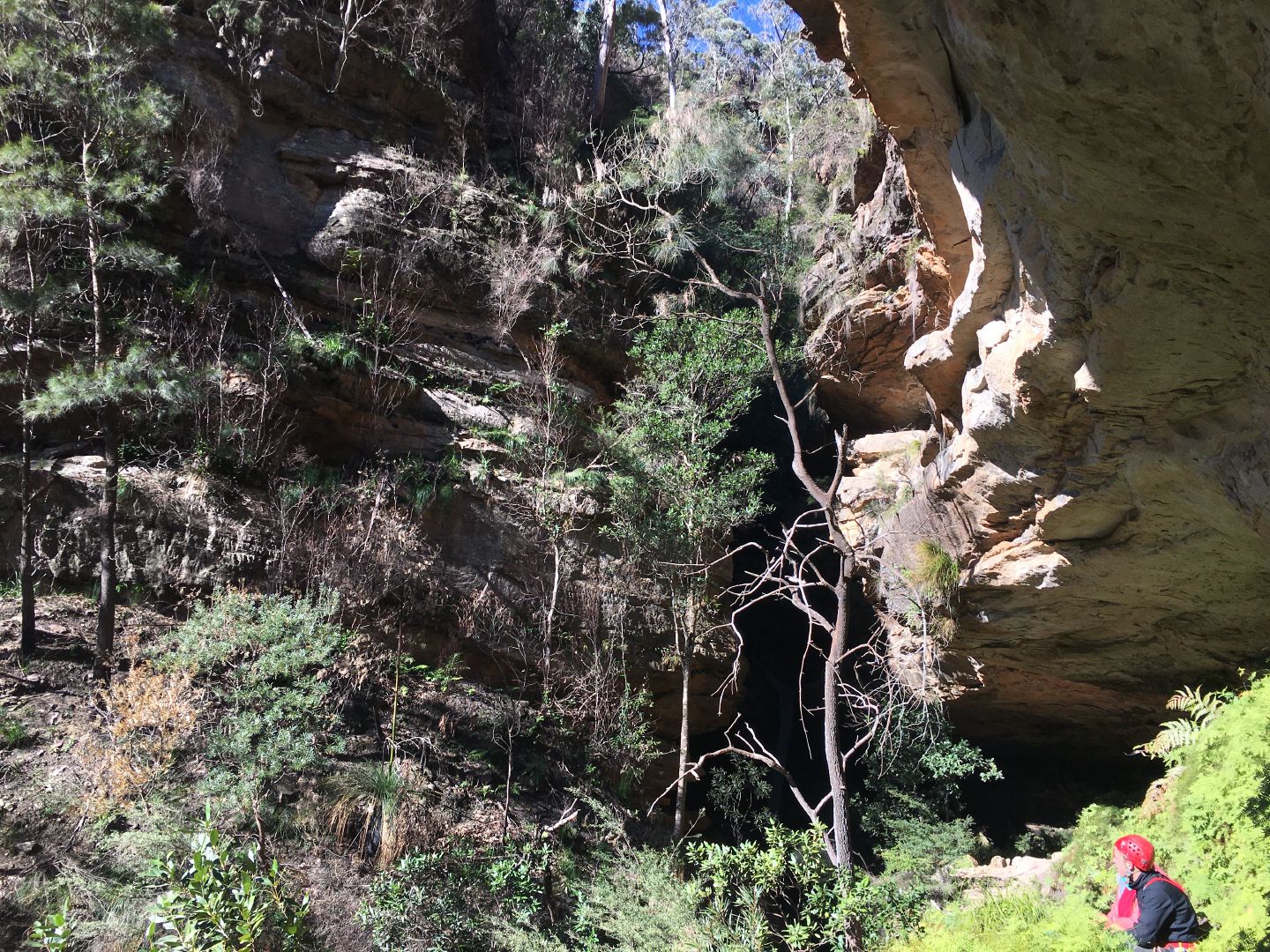 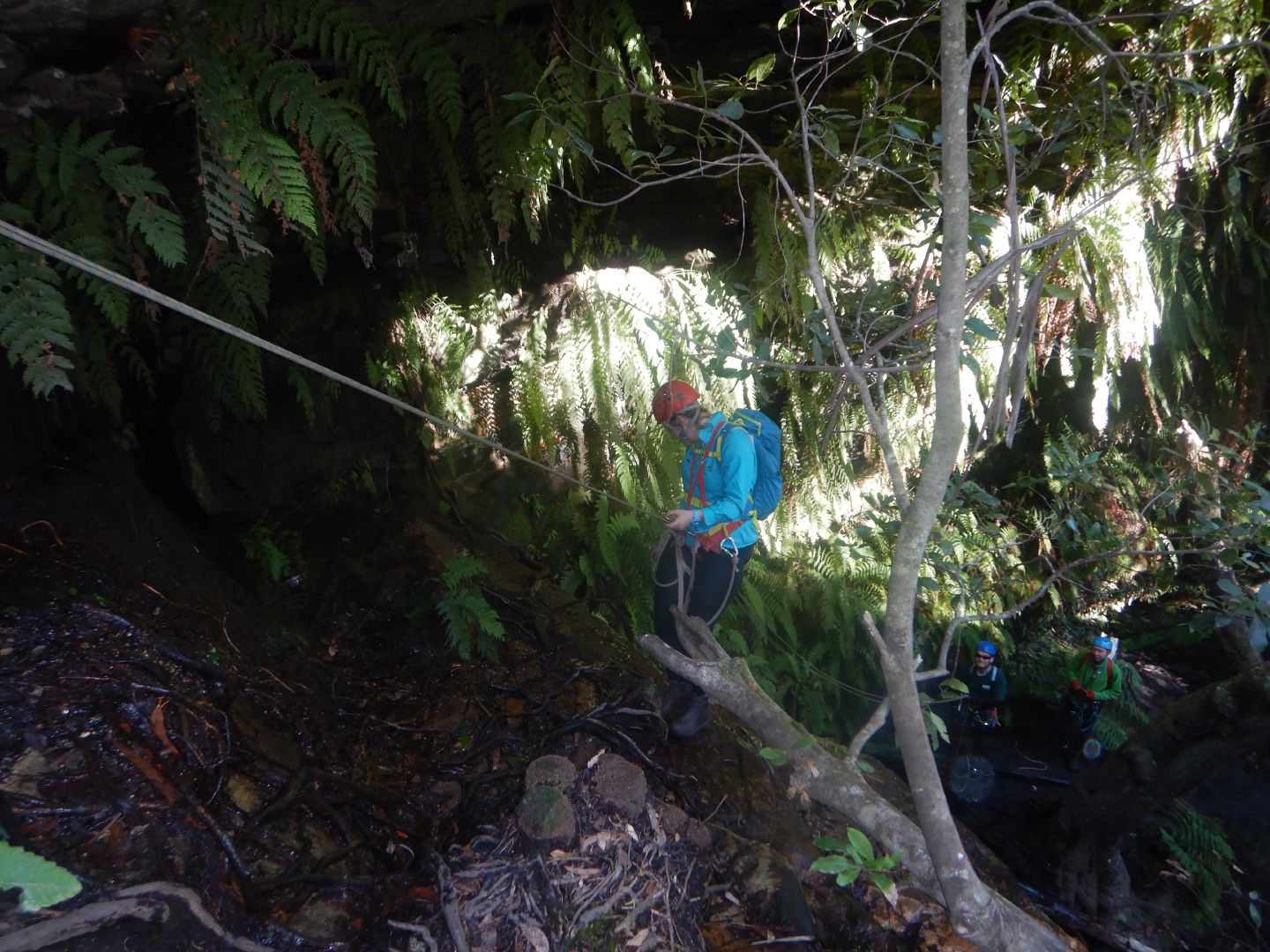 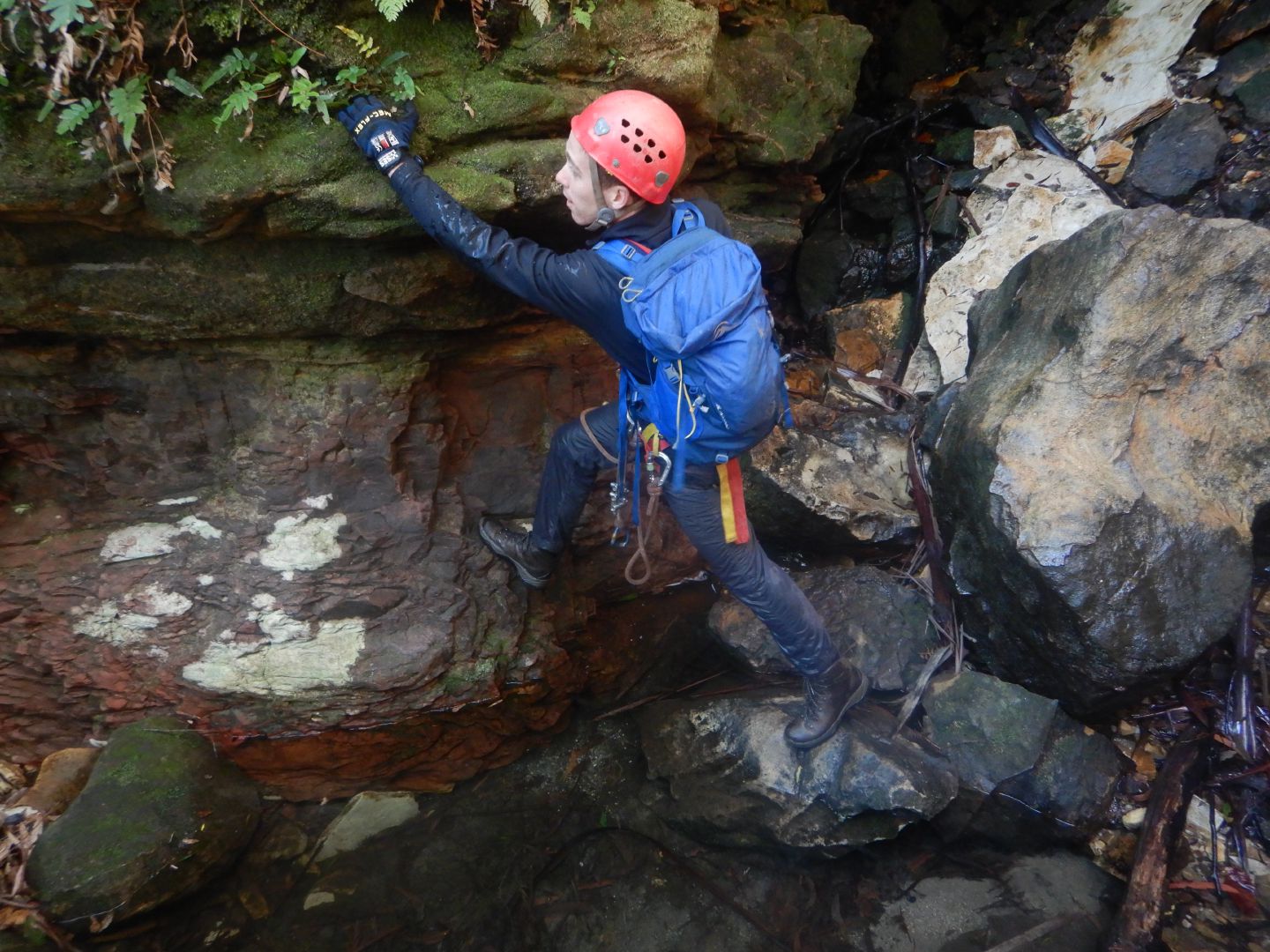 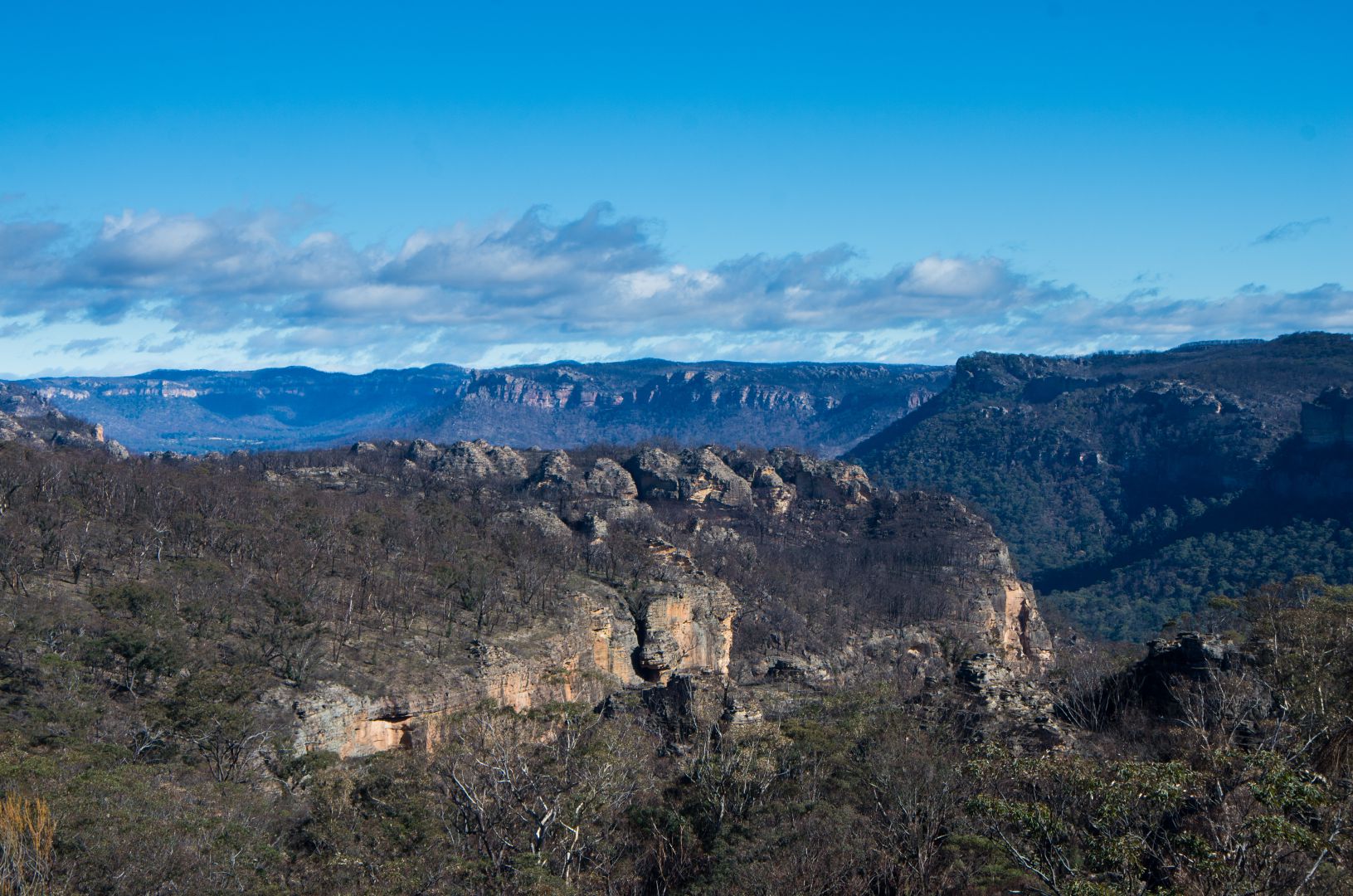 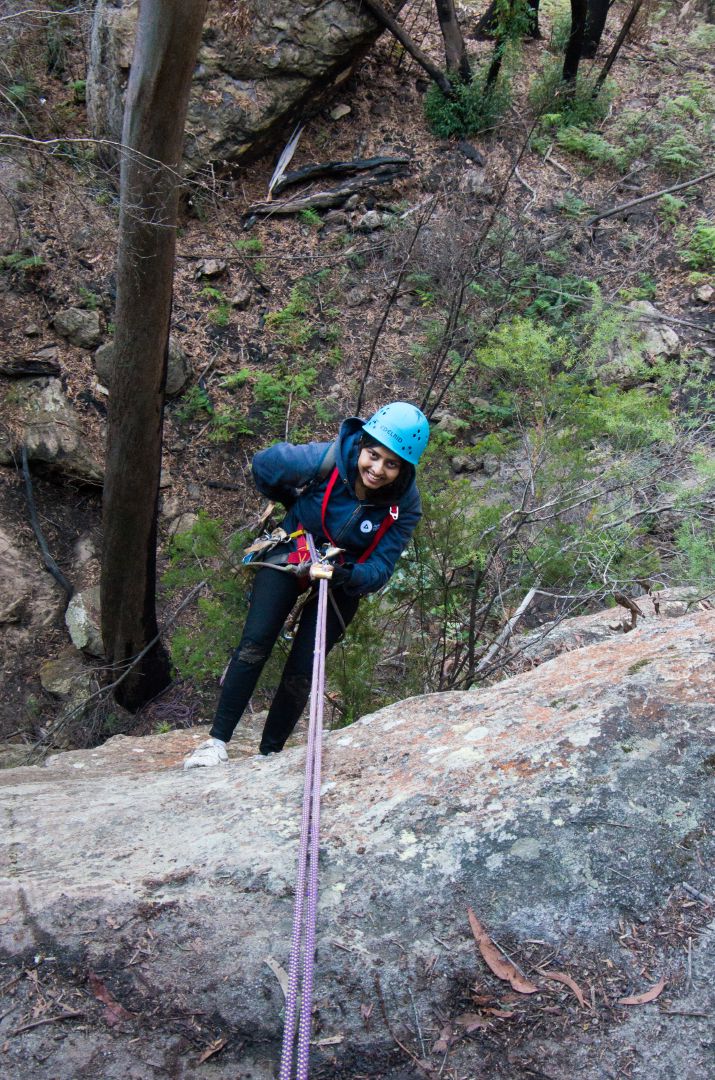 This was our first club trip in almost 4 months. We decided to do some dry canyons in the Blue Mountains since it was far too cold to be swimming and most all caving locations in NSW were shut from either the fires or COVID. We went up Friday night and quickly discovered that every man and his dog(s) had also decided this was the weekend for the Blue Mountains, presumably a side-effect of being stuck inside for so long. The campground we’d planned on using was full to the brim, so we went another 20 minutes (away from the canyons) and found an overflow campground that was also pretty chockers, but enough space for us. Our neighbours had the ingenious idea of leaving their engine running most of the night for heating - thankfully I had earplugs.

On Saturday we headed up to Tiger Snake canyon. The drive there gave a taste for the kind of scenery to expect – burnt trees as far as the eye could see. As we approached the turnoff to the canyon, a convoy of 4 cars came up behind making us a little worried about a potential traffic jam inside the canyon. But they had a quick look at the signs and decided they weren’t up for a 3km walk, never mind a canyon. The walk to the canyon was quite pleasant ridge-walking and very open, but there was a distinct lack of the colour green. There was some regrowth, but also lots of plants with no regrowth at all. Tiger Snake canyon really shouldn’t be open yet if we want the vegetation to properly recover.

Anyway, we got down to the first pitch and found it to be quite technical. It involved bridging out about 5m while on rope before lowering yourself and hoping not to pendulum back into the slot and get stuck. It had me a wee-bit worried about the rest of the canyon, but the next pitches all proved to be less challenging. I was expecting Lachie to get very wet on the second pitch, but he showed off some impressive balancing skills across a log to remain dry. The third pitch brought us out of the slot, so we returned to bushwalking much to Michael’s disappointment. We had lunch in the sun before finding our way to the next pitch. The obvious rigging point was a tree we didn’t trust as it was badly burnt so we did a little exploration for another way in. Michael was the first down and found out that this was a pitch for headtorches. The pitch descended into a mesmerising snaking slot that was 10-20m tall but only 1-3m wide and wiggled and winded it’s way for at least 50m lengthwise. Definitely the most spectacular part of the canyon for me. Given the lack of light and constricted walls it felt somewhat cave-like. We emerged from the slot and were greeted by some fairly thick bush-bashing before finding our gully for exiting the canyon. The walk out wasn’t too bad except for one climb over crumbly and loose rocks that had me petrified, but I think that’s just my fear of heights – the others didn’t seem to have much trouble.

The second night was a whole lot colder than the first, the inside of Brit’s tent flap frosted over within an hour of opening it in the morning. The cold meant we had a much slower morning but were still on the road by 8.30am heading towards Juggler’s canyon. The road got progressively worse and we ended up parking around 1km before the actual parking lot as we were driving at pretty much a walking pace anyway. The track was in very good condition all the way to the canyon and the vegetation was all unburnt which was a pleasant contrast to yesterday. The first pitch was absolutely picturesque – water trickling down the multicoloured rocks with ferns and an abundance of greenery all round. It set the tone for the rest of the canyon as the trickling creek and luscious plants continued throughout. We abseiled down a slide that jumped over a ledge with a 3m drop, then abseiled through a rocky outcrop before arriving at a much larger 20m-ish drop. Michael went first and discovered (a bit late) that he had to walk through chest high water. Not ideal in the middle of the water, he was absolutely freezing. Meanwhile Chris had gone walkabout as he often does and had come across another rigging point. There was a resounding yes from Michael when inquired as to whether we should relocate the rope, and the rest of us had a quite spectacular 30m abseil and didn’t get wet. Luckily, we soon emerged into some blazing sunlight meaning Michael was no longer hypothermic.

The rest of the canyon continued to be absolutely beautiful but was much less eventful. We had lunch at the intersection of Juggler’s and Grand Canyon before jumping on the main track and walking past gawking tourists. We made a bit of a fool of ourselves by going off-track early but soon found the way back to the cars which was a super obvious path, although a little bit steep. After arriving at the cars we packed up in record time, I barely had time to get changed. To top the trip off we did a little side trip to see the stunning views from Point Pilcher. That rounder off a very enjoyable canyoning trip, I’m keen to get out to the Blue Mountains again.